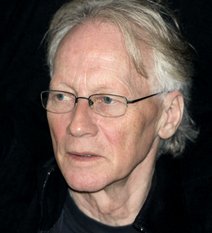 My career as an artist began in earnest in the late 60s. During this time, I became engrossed in an art direction that was based on Pop Art with strong impulses to the 70s new realism and super realism, which had a significant influence on my relationship to painting. The photograph was used here as a supporting function for a realism that does not leave out a single detail, often with details from everyday utensils and life around us, a reflection in a shop window, a crossroads, a parked car on a quiet road. Later this realism was slowly broken down for me, and the recognisable elements in my paintings disintegrated. There was only light, reflections and structure left. In recent years, the realistic figures have slowly returned, but in a new and simpler form with a brighter colour scheme.

My recent paintings and aquarelles are still composed of recognisable, fragmented, everyday objects, such as chairs, car wrecks, sofas, windows, doorways, empty spaces, abandoned homes, shadowy people who contemplate the outside world, people moving through rooms, people moving out of the picture surface, light reflections with a physical presence, free-floating objects in semi-abstract room, text fragments like disconnected associations in the compositional structure.

The white colour is a fundamentally important element in my paintings. The white colour helps to define the other colours in the painting. My paintings have two opposite tendencies. One tendency in the painting shows tight and precise shapes and lines with clear messages, the other tendency shows an inherent instability and conflict, a break from the tight and controlled.

In individual cases objects in my pictures originate from a personal recollection. The recalled recollection is often symbolised by a specific object, which like a reunion, suddenly becomes alive again, in the same way that music can make us feel, almost taste, a particular event, person or feeling.

I will try to put into words a selection of the objects that often appear in my paintings and aquarelles in order to better understand them.

The sofa evokes the memory of an unreal state of despair and failing strength with powerful hallucinations in the form of unreal, but present people who were there in the room with me, moving through the room, eerie and enticing at the same time.

The car wreck that evokes an incredible force in me, a desire to restore the destroyed. It is as if fragments of words and sounds float out of the wreckage, like a resonance of something lost, something pent-up, something unsaid, unresolved.

The chair is the platform where my thoughts flow and dreams come to the surface to be examined. At the same time, I have a fascination for empty chairs. I sense that people are present around them, on them, in them, there is presence and absence at the same time.

The window, the empty room and the doorway have a clear reference to the claustrophobia in me. Through openings and the room’s free expanse I can escape and think clearly. In these empty rooms and openings I meet the external currents with no filter, with all my senses open.

Deserted places. I am fascinated by rooms, which for many reasons, have suddenly been abandoned by the people who lived there. Fragments of an entire life meet me. The abandoned items and the traces that are left in the room, now have their own twisted, distinctive life. The witness of these abandoned scenes will no doubt go into a special state of peace, contemplation and reflection.

The Shadow. I often use the shadow that someone casts as the primary figure in the painting. The shadow shows reality in a sensual, universal way, free of recognition and identity.